Gaylordsville Volunteer Fire Department
Home2021 Chicken BarbecueAbout UsApparatusBecome a memberCPSC RecallsCall HistoryCall VolumeContact UsDonateERGEvents CalendarFilesFire GlossaryFire NewsGuestbookLinksMembersNewsPicturesThe FallenVideo
Recent calls
Tree Down in Road Way
The Crew Was Dispatched this morning to investigate a possible tree and wires down in roadway, Arriving units noticed no wires involved and tree was already removed from roadway. Units cleared and ret...
➜
Motor Vehicle Accident
Units were dispatched for a motor vehicle accident. Arriving units assisted ems with patient care, while others cleaned up a minor spill
Medical
While Crews were working in Kent, GVFD first responders requested to assist the ambulance for a fall. Both calls cleared up at the same time.
Mutual Aid
Around 815pm the GVFD was dispatch to the town of Kent for a possible structure fire, While crews were enroute,,Kent Fire was able to find the fire in the wall. We provided Coverage for their station ...
➜
News headlines
Open House
We will be hold an open house on June 18th starting at 10amCome see the Fire Trucks, Tour the firehouse, meet our members.The New Milford Fire Marshals Office will be attending to educated on fire saf...
➜
Memorial Day Parade
The Gaylordsville Vol. Fire Department will be holding its annual parade Starting at 8am Monday May 30th, 2022Come on by and see the parade
2022-2024 Elections
After our Annual Department meeting, The following Members were Elected to to lead the Gaylorfsville Vol. Fire DepartmentChief: Tyler BergmannAssistant Chief : Doug LeachCaptain: John Oviatt1st Lieute...
➜
Wednesday Night Training 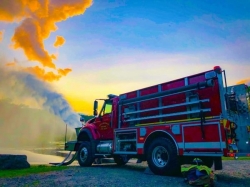 Doing a little but of drafting with Engine 41
About us

The Early History of the Gaylordsville Fire Department
by Ex-Chief and charter Member, Alan Dodd

Gaylordsville didn't have a lot of fires but what we did have were total losses because we were just too far from New Milford. One fire that started people wishing for a fire department was at the old Hall house, built by the first Gaylord in Gaylordsville, where George Washington dined with Deacon Gaylord when his army stopped under the Washington Oak. A chimney fire started which could have been controlled by a local fire department.

After World War II talk became serious and a meeting was called at the Grange Hall. About 50 men signed in as willing to join a fire department and the following officers were chosen: Chief: Harry Furnside, Captain: Charlie Jones, First Engineer: Henry Grisell, Second Engineer: Roy Booth, 1st Lieutenant: Emanuel Williamson, Second Lieutenant: James Hastings, Treasurer: Richard Gebhardt, Financial Secretary: Alan Dodd, Recording Secretary: John Flynn. John held this office for thirty-three years. Chief Furnside was the only one who had belonged to a fire department before and was a big help in getting us started. Now we had a fire department and officers but no equipment or money.

Charlie Jones, Al Trautman and Alan Dodd were named as an Equipment Committee and Frank Beach as Chairman of a Finance Committee to try to find equipment we could buy and money to pay for it. We got our first break when Lou Maas, a friend of the Joneses and Chief of the Bay Shore, Long Island Fire Department, told us of a LaFrance fire truck, old but still serviceable. They would let us have it for $240.00. It was a big boost to our morale when we had a fire truck.

Chief Furnside, while visiting Schenectady, discovered at Army Surplus, a new Chevrolet fire truck, completely equipped and ready to ship overseas when the war ended. He came home and got the equipment committee. We looked at the truck, called home to have a special meeting of the department that night. They wanted to buy the truck. Frank Beach collected $800.00 and the next morning we started back for the truck. We got there at noon, expecting to give them the money, take the truck and start home. We didn't know about the Army. After many telephone calls and much paperwork, we started home at five o'clock in a raging snow storm. By using chains and four-wheel drive on the hills, we got home at two o'clock (a.m.). I was driving and had the honor of bringing the first fire truck into Gaylordsville. After years of service the truck was rebuilt with a new motor and transmission and is still used as a brush fire truck. The next week we went to Bay Shore and brought home the other truck with no problems except a hub cap came off on the Triborough Bridge and we had to walk back and get it.

Both trucks were stored in Williamson's barn, but the barn had no heat and cold weather was coming. A lady who would be away all winter let us use her garage. We put in a stove and kept one truck there. The other truck was drained and left in the barn.

The Finance Committee had done quite well raising money, so we started plans for a fire house. Clarence Evans gave us a building lot and James Hastings was Chairman of the Building Committee. A 30 x 40 foot building was planned, with the first story of cement blocks and the second story frame and clapboard. It was built entirely by volunteer labor. Willard Thorp got us a furnace at cost and installed if free. When cold weather came we had a warm place for our trucks.

The building still had a dirt floor and it took several years before we could afford to finish the second story. We held our meetings between the trucks and sat on seats made of planks and cement blocks. The next year John Pol said he was tired of walking in the dirt and would pay for cement for a floor, so the first story was finished. The building has been added onto twice and now houses six trucks.

As we could not afford to have the Answering Service handle our fire calls, we listed three telephone numbers to call in case of fire: Farnham, Beach and Dodd. Siren switches were installed at the three places. The system worked well as the women did a good job of making sure one was always there to answer the calls. In case one might fall or be injured in the hurry of getting up in the middle of the night to answer the phone and blow the siren, we made them members of the Fire Department so they were covered by our insurance. Gaylordsville was the first Fire Department to have women members.

When we started the Fire Department, Gaylordsville was a small farming community of about 400 population. It is now a much larger place with many people who work outside the village.

This site has been viewed 12,953 times.
Calls
News
Events
Pictures
Apparatus
Maintained by the members and staff of Gaylordsville Volunteer Fire Department. Designated trademarks and brands are the property of their respective owners. Copyright © 2006-2022. YourFirstDue Inc. All Rights Reserved. Content on this web site is supplied by Gaylordsville Volunteer Fire Department. YourFirstDue Inc. cannot be held responsible or liable for any content, text, pictures, or any other media found on this web site.
Management login
Powered by